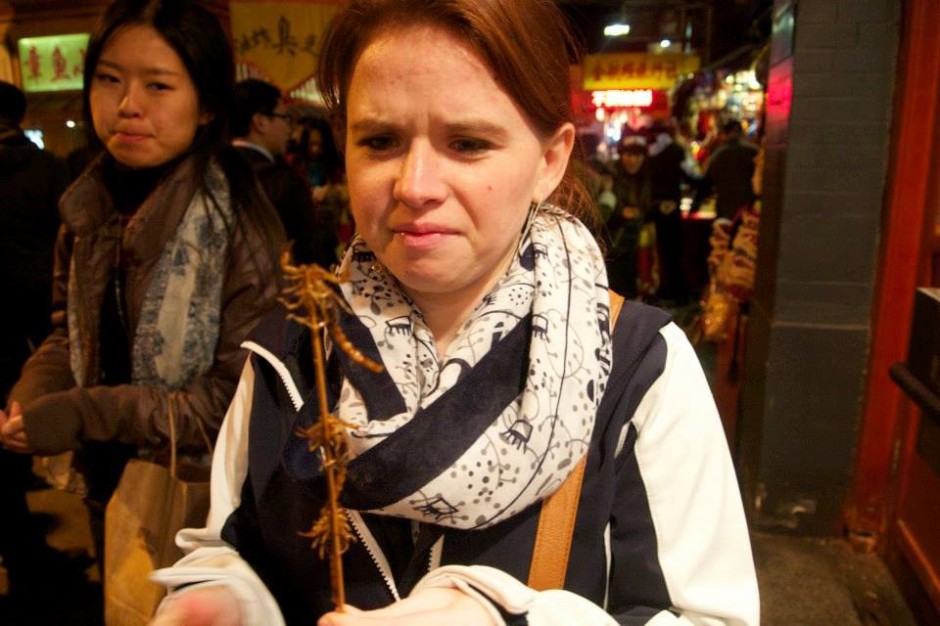 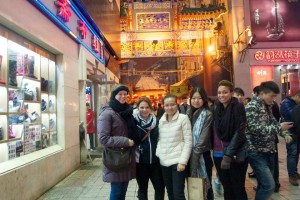 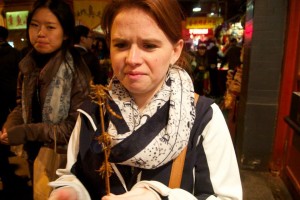 Your time abroad is THE time to have adventures, try new things, and immerse yourself in an entirely new world. Where is the best place to dip your toes in the water of a new culture? For me, it was food! Near the center of Beijing there is this lighted, stinky back alley between buildings that on any given night is packed with people. On either side there are food vendors, and there is an entire section just for souvenirs that you can bargain for. This place is called 王府井 (Wángfǔjǐng) and in Beijing, it is the place to get crazy and adventurous food! What was the craziest thing I ate while abroad aside from camel meat? Scorpions! Multiple food vendors in this alley sell either three small scorpions on a stick or one big one. After you order one (alive) they put it in a deep fryer, spice is up, and then you get to chow down! After the initial fear of even putting it in my mouth, I ate it and it was actually pretty good tasting! (好吃!) Minus the legs of course!

The next thing I had to try, of course, was starfish, on a stick! My two friends and I decided to split the starfish, however the vendor never told us how to properly eat it. After taking the first bite into the hard, salty, and crunchy shell the vendor man started laughing at me! He then proceeded to let me know that you are supposed to crack open the outside shell and eat the insides…. Well at least it didn’t taste that bad! I only took two bites and then I had to pass it off to my friend, probably not something I would eat again,

What better to follow up Starfish with than Snake?  While I do not have a picture of this creature, it was a small, skinny snake with the head still attached, spiraled around a skewer. After biting into part of the body, I realized that it has almost no taste and was all crunch. Then I had the pleasure of eating the head… no so great!

I finished my adventurous night of eating with mini, tart apples covered in some type of candied coating. Delicious!

After the fried ice cream, and hard candies that followed, my friends and I tested our skills at bargaining. In China, if you go to market, there are not set prices for items to purchase. The vendor gives you a price that is usually outrageously high, the buyer suggests a very low price in comparison and you bargain down to a middle ground. Bargaining in Chinese was one of the most valuable language lessons I learned, and I was able pay less! Overall it is a great culture to learn from!