As a junior at DU I studied abroad in Pietermaritzburg, South Africa for five months. Because I was in Africa, everything felt like an adventure. Obviously, backpacking through the Drakensburg Mountains and four-wheeling across the Lesotho/South Africa border was adventurous, but even the smallest things were new and exciting. The grocery stores carried different kinds of foods. People used different kinds of slang. The public transportation was discombobulated and confusing. Just making it from point A to point B on a local taxi was thrilling. Trying to remember to walk on the right side of the street was an adventure – if I forgot I’d get run down by pedestrians that could actually tell their right from their left.

Upon arriving back in the United States I suffered from a serious case of culture shock, and on top of that, my American life seemed dull and mundane. I went back to school, started working again, headed to the gym four days a week… life was good, but it wasn’t exciting. I wasn’t traipsing around Southern Africa, waving hello to monkeys as I went for a run, or listening to the exotic sounds of Zulu or Xhosa.

Studying abroad was so exciting, it was almost as if I had lost my flair for my everyday life in the shadow of study abroad’s glow.

It’s now been over three years since I returned from study abroad. I look back on those difficult months of adjusting and readjusting to my life in the States, and my worries and frustrations now seem so trivial. It’s as if, when I arrived home from South Africa, I felt that my adventures were over. That thought seems funny to me now – my adventures, over? No way! They were simply just beginning.

Just seven months after arriving home from study abroad I went back to South Africa, where I road-tripped up into Zimbabwe to go on a missions trip and then stay at a friend’s home for several weeks. 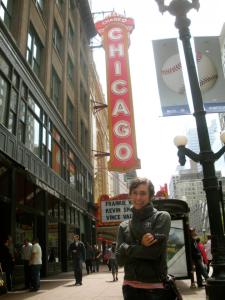 After graduating from college I moved into the city and got my own studio apartment. I visited a friend in Chicago because I’d never been, and always wanted to go.  On a long weekend, a close friend and I jumped in my car and drove up to Mt. Rushmore. Why? Because we wanted to. Because life is never meant to be mundane. Because there is always an adventure on the horizon.

Now, looking back on my melancholy upon arriving home after study abroad, I understand where it was coming from… but it seems a little bit silly. My vision was so short-sighted. I had just come home from the greatest adventure of my life, but at the same time, my life was just beginning. Even now, three years later, my life is just beginning.

Our lives can be adventurous for as long as we live them that way. When you get home from abroad, try to remember that. Jump in the car and drive somewhere random. Buy a new ingredient at the grocery store and think up some recipe that uses it. Talk to a random person on the street. Carry your adventurous spirit wherever you go – it’s a gift that’s meant to be used.

One thought on “Living an Everyday Adventure”