My second day in Mendoza, I took three different buses before I was finally on the right one home. Even before arriving in Argentina, I had (and still have) a notoriously bad sense of direction. I’m used to not worrying about my data usage and pulling out my phone to look up  directions. However, on just my second day, the phone I brought to use as my Argentinian phone broke, I didn’t have an international plan for my US phone, which was with me, so I relied on frequent stops at coffee shops with free WiFi and a physical map. Google maps told me to take the T12 home; I waited for 30 minutes, but the T12 never came. I gave up and got on a random bus, hoping for the best. It was going in the opposite direction. I got off and asked some locals which bus to take. They showed me, but it was the wrong one as well. Thankfully, the bus driver knew which bus I needed to take, so after close to an hour and a half of wandering around Mendoza close to nightfall, I was finally on my way home. Two weeks later, I find out the T12 is actually the G12. 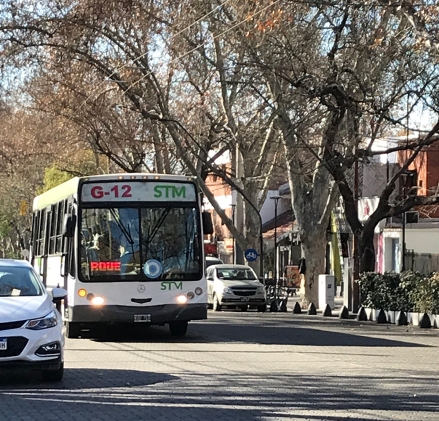 In my first few weeks abroad, I thought my biggest issue would be the language barrier since Argentina is a Spanish-speaking country. It didn’t even occur to me that navigation would trump that in the beginning. I am now five weeks into my program; it took me four weeks to figure out exactly which buses take me home, which take me to class, and which take me downtown. I carried my map for the first three weeks, feeling like the ultimate tourist when that was what I was trying not to be. Walking helped. I was able to see and explore the city, orienting myself so I knew where I was in relation to other locations. Mendoza is a grid and I can now proudly say that I know approximately a 25-block radius.

A highlight came when a woman asked me for directions. I had no idea where she was going, but I must have looked comfortable enough for her to assume that I did. Learning a new city is challenging and uncomfortable, but the first time you are able to travel without getting lost is one of the most rewarding feelings.

Zoe Kaldor is an International Studies and Strategic Communication double major. She is studying abroad with IFSA-Butler in Mendoza, Argentina. Originally from New York, DU’s study abroad program was one of the reasons Zoe chose to attend DU. She specifically chose to study abroad in Argentina because she wants to improve her Spanish skills and experience a new culture, for she believes it is so important in an increasingly global society to be able to communicate in languages besides English as well as experience different ways of life. Zoe is an avid traveler and loves to explore new places; she is excited she gets to do both.

One thought on “Directionally Challenged”