Wise advice from the DUSA blog coordinator.  I would almost say that it was an understatement.  Internet here has been one of the biggest headaches of my experience.
Problem 1: I have a Mac.  Apple Macintoshes have become common throughout the states.  They haven’t fully made their journey to South Africa yet.  My Mac wont pick up the wireless.  I took it to I-Tech every day for two weeks before they got it to work.
Problem 2: The wi-fi here likes to not work.  It likes to not work a lot.  It’s rather lazy actually.
Problem 3: Half of the online sites, such as Facebook, Tumblr, WordPress, and Spotify are blocked from the hours of 7am to 7pm.  I thought becoming nocturnal was an option until I realized the entire campus of PMB already made that decision.  The Internet at night is so slow and so bad that you can’t properly get onto those sites using the wi-fi because everyone is trying to use it at once.
Lesson of the month:  The computer lab is your new best friend. 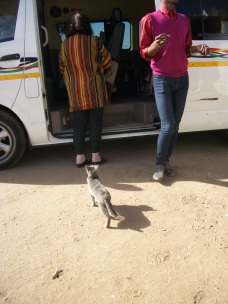 As expected of a different country, there are other things I’m not used to as well.  For example, Denver has squirrels – South Africa has cats.  There are wild cats everywhere.   They are pretty too.  They don’t look wild or mean. They look like house cats.  Except that there are a lot of them and they live outside.
Also, Denver has hotdog stands – South Africa has outdoor convenience stores.   All along campus, about a three minute walk apart, are little stands.  They sell candy, chips, cigarettes, and knick-nacks made out of beads. 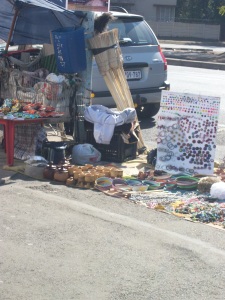 There are tiny things that I notice too.  In the states, when you’re walking in the street and a car is coming at you, you move to the left.  Here, that gets in the car’s way.  Also, when you’re walking through campus or on a sidewalk in the states and you come across another person walking towards you, you move to the right.  Naturally, they move to the left here.
Food.  There are things that never change.  Like McDonalds.  KFC is actually really big here too.  But then there are the things missing from America.  Like Indian food and Naindoos (a chicken place). And America needs to steal the recipe of Iron Brew and get it in the states. 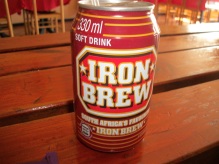 I can’t describe this drink.  It’s so unique in taste. One of my good friends asked me to bring back the best candy, and I wish I could bring back this soda instead.  Large amounts of it.  A lot of people here don’t like it, but all of the Americans on my program are in love.

The trees are out of this world.  I don’t know if South African trees are mountain-like jungle trees or a jungle-like mountain trees.  But they are both.  A part of the tree is a type of tree I would find in Colorado and the other part reminds me of a tree from the lion king.  And monkeys roam around in them.  I really like the trees here.
My favorite cultural difference is the language.  We all speak English, but obviously it’s not the same.  The simple way to put it: Americans are lazy.  In the states it would be common for a college student to say, “When are the other kids showing up?” if you’re waiting for friends to arrive.  As a college student, they clearly aren’t “kids” anymore, but we will often use that term.  When I first said that here the response was, “What kids?”  Likewise, we all go to “school” in America.  It doesn’t matter what grade you’re in, you’re in school.  I was shocked when I first asked, “Do you go to the school?” And the response was, “No, I go to the Varsity,” their other word for University.  Here, a school is a place where children go.
People are very friendly in South Africa.   It’s common to hug people when you first meet them.  It’s also common for you to get stopped by strangers who just want to say hello and ask how you are.  It’s refreshing in comparison to the States were life is too busy to have time to stop someone you don’t know in the street.

One thought on “Internet won’t be what you’re used to… ;)”