Growing up in the middle of the U.S., I had never experienced the functionality, accessibility, and true awesomeness of train travel before studying abroad this past fall.  I guess it would make sense that my rail experiences in my life thus far had only consisted of a ride on a mini train “choo-choo”-ing at a kid amusement park (hey, I’ve lived in Colorado all my life)!  But, after this last semester of traveling all over Europe, it seems as though I had missed out on one of the greatest forms of transportation EVER, and I wish we had more trains crisscrossing the our country as an alternative to the ever-familiar air and car travel. 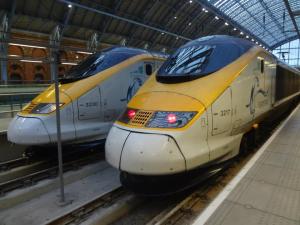 Traveling by train is one of the fastest ways to get from one place to another, especially if you are traveling in-country abroad or venturing to other countries on the weekend.  Contrary to the dreaded lines, security, and early arrivals at airports, you can literally arrive at a train station a few minutes before your departure and still catch it!  George Winters once said that “if God had really intended men to fly, he’d make it easier to get to the airport,” which is totally true when you have to trek way outside of the city to get to major airports; this is the exact opposite with central train stations, however, as you almost always arrive right in the center of town and don’t have to coordinate a taxi or other transportation to get to where you are going.

Did I forget to mention how relaxing trains are?!?  I loved sitting back in my chair and having a few hours to think and reflect on my past week or so of study abroad (or catch some much needed sleep before I began a new adventure in a foreign city).  I was so accustomed to the cultural mindset here in the U.S. of looking toward the future and advancing toward my professional and personal goals that I rarely ever reflected on my past experiences and what I had learned.  Training across Europe really gave me that opportunity to appreciate and understand the value of reflection and has helped me to be more mindful of what my past can teach me.

breathtaking landscapes and countryside that lie between you and your destination (something you miss completely if you fly).  This quote I found sums up this idea pretty well: “Thanks to air travel, it is now possible to travel across the country from coast to coast without seeing anything.”  The beautiful hills and scenery aren’t the only interesting things you encounter on the train though, because there are plenty of things to see ON THE TRAIN, including people watching and chatting with foreigners.  I vividly remember having a two hour conversation with an Argentine mother who was traveling across Europe while I was on my way to Strasbourg, France for the weekend: what a quirky and fascinating lady she was!

Traveling by train was an integral part of my study abroad experience and I really do miss it. So, until we get a better train network here in the U.S., you can find me riding the LightRail end-to-end, all-the-while taking some time to reflect on my current quarter and reminiscing about study abroad.