When it comes to making plans and sticking to it, I’m what you could consider a Poster Child. I like to know what is happening for each second of every day. If I have free time, great, but it needs to be scheduled. So you can imagine what I’m like when I travel, particularly if I’m only going to be in the location for two or three days. That little voice in my head says ‘Oh my goodness! You only have 72 hours to see everything there is to see in this city; GET A MOVE ON!’ and I become a madwoman. I’m the kind of person who will try to see every piece of artwork in the Louvre in less than a day. In fact, I once had a layover in Paris for 8 hours, and managed to visit the Louvre, Eiffel Tower, Arc de Triomphe and the Grande Arche de la Defense. Like I said…madwoman.

This compulsion became particularly acute when I spent a year studying in Geneva, Switzerland. Given Geneva’s central 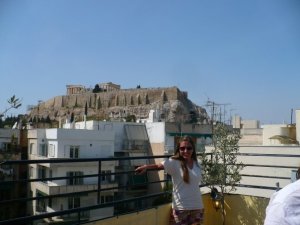 location and the Swiss insistence on being on time, traveling around Europe was incredibly easy in addition to being incredibly cheap. I was on a train, bus or plane nearly every weekend. Rome, Athens, Budapest, Lisbon, Cork, Amsterdam, Istanbul…Europe was my oyster. Naturally, I had these trips planned down to the millisecond so that I could squeeze in as much as possible. However, as the saying goes, ‘the best laid plans of mice and men…’

For my spring break, I planned to go to the Greek island of Corfu for seven days, and finish out the trip with two days inAthens to see all of the requisite monuments and statues. However, day six in Corfu came around, and we just couldn’t seem to drag ourselves off the beach to catch the bus on time. ‘Oh well,’ we thought ‘so we only have two nights and a day in Athens. What’s the big deal? We can see all the major stuff really quickly.’ So we spent another day on Corfu, caught the bus to Athens and arrived at our hostel just in time to collapse for the night. We woke up early the next morning to get a jump on the day (I had planned out ten hours or so…) and ventured out into the streets. But, they were empty. There was not a soul out there. I knew it was a Sunday, but I thought people would be out and about, no?

Disclaimer: when I was growing up, Easter was a day that meant Cadbury cream eggs and jelly beans…probably a stuffed animal or two thrown in. Beyond that, I never paid much attention. So, imagine my surprise when we discovered that the one day we had planned to spend in Athens was Greek Orthodox Easter, and all of the major monuments were closed. I very nearly had a meltdown. I had one day in Athens, and I couldn’t go to the Acropolis?! Are you kidding? We couldn’t find an open café, so we dejectedly walked back to our hostel. We asked the man behind the desk if there was anything we could do, and he replied that the city was shut down. However, the hostel would be roasting a lamb on a spit on their rooftop deck in half an hour, and everyone was invited.

I have to say, it was one of the best days of my life. The fact that I couldn’t do anything even if I wanted to offered an unexpected sense of relief; I didn’t have to rush anywhere…I could just sit and enjoy the beautiful Athenian sunshine, turn a lamb on a spit (I won’t lie…that took some getting used to…) and chat with a bunch of people my age who shared my love of travel. And I still managed to see the Acropolis from the roof of the hostel, so all was not lost.

My point is this: planning is great, but be prepared for unexpected opportunities and welcome them. Never in my life did I think that I’d be eating roasted lamb off a spit in Athens on Greek Orthodox Easter. Everyone can go to the Acropolis and Hadrian’s Arch, but I had an experience that is completely unique that I’ll carry with me for the rest of my life. It was the same situation a week later when I was in Rome and couldn’t see the Sistine Chapel because the Pope was giving a sermon outside the Vatican (I really need to learn my religious holidays…) Millions of people have seen the Sistine Chapel, but who has seen the Pope give mass? I discovered that it’s the things you don’t plan for that end up being the most valuable.

I’m still fairly obsessive when it comes to planning, but I’ve certainly learned to roll with the punches better, and even to hope for a diversion from the path.