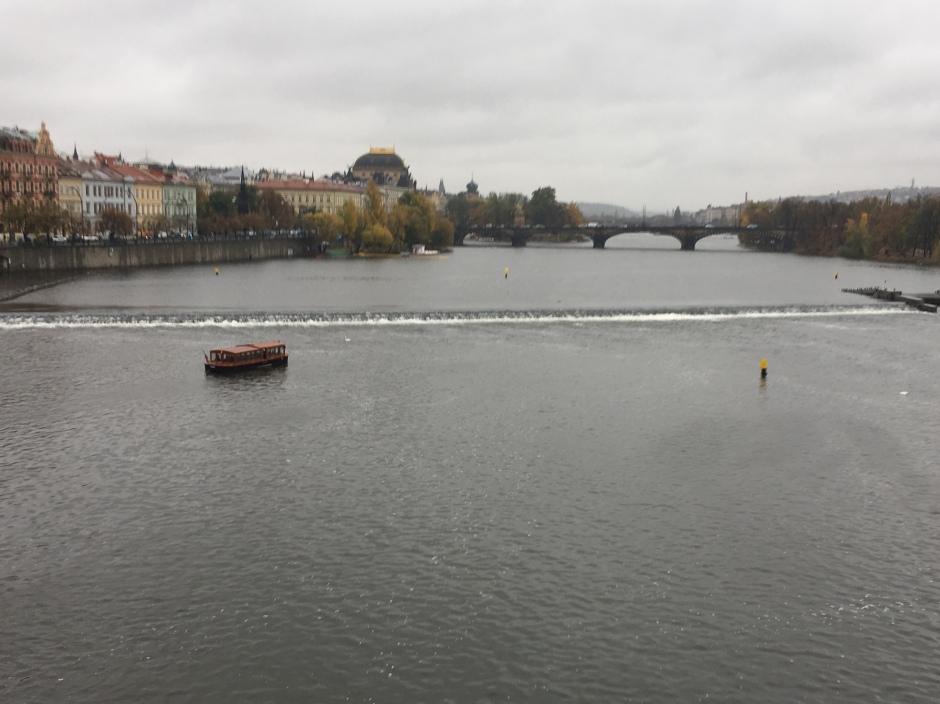 This past Sunday, October 28th, was the 100th anniversary of Czech and Slovak lands, and I feel very privileged I could be here to witness this celebration! However, my expectations of the celebration were a bit far from reality…

[For those in need of a short history lesson: Czechoslovakia was officially declared a country in 1918 due to the fall of the Austro-Hungarian empire; it remained a country throughout World War II, then peacefully split in 1993 because the Czech lands and Slovakia essentially just grew apart (I won’t get into the details). Because the split was so peaceful, Czechs and Slovaks are very interconnected to this day, and I probably meet an equal number of Czechs as Slovaks in my classes as well.]

There were a lot of special occasions happening this weekend like fireworks, parades, free museum entries, and the re-opening of the National Museum that had previously been closed for 6 years.

I was excited all Sunday, noticing the colors of the flag everywhere and everyone in good spirits. However, when I arrived to the parade and saw the masses of people, the atmosphere changed. I came in with the expectation that this parade would be similar to a Fourth of July parade in the United States- colorful floats, lots of food, and just general fun. When the parade started, it was much different.

No candy was thrown.

Decorative parade floats were nowhere to be seen.

In the grand scheme of things, 100 years isn’t very long at all! Most countries are far older than this. Czechs and Slovaks had a far longer and less convenient road to becoming a nation. Since these countries are still new, the losses that it took to get to where we are now are still fresh. Instead of deaths due to war happening centuries ago, it was just a couple generations ago.

The United States has a lot to celebrate because, well, we won a lot of what we fought. It hadn’t even crossed my mind that Czechia and Slovakia didn’t have such a simple history. The time before 1918 was filled with a lot of struggle. With empires taking over, religions being oppressed, cultures and languages being pushed away, this time was far from peaceful.

This parade was an eye-opening experience to show how the wound that these countries acquired in the recent past hasn’t quite healed yet.

Hannah Langford is taking a break from studying Integrated Sciences at DU to study history and culture at Masaryk University in Brno, Czech Republic. She’s looking forward to exploring the unique geography and outdoor opportunities in the area and the surrounding countries. She’s also looking  forward to eating a lot of chocolate.

I am over half way though my abroad program. In many ways, I feel like I belong, yet in other ways, I am still learning the quirks of Mendocino society. The period of initial culture shock has long past; however, every now and then I need to remind myself to take a breath and remember that I’m not from Mendoza and any frustration that I still have is normal. Nevertheless, there are three Argentine customs worthy of sharing.

It is common practice to kiss everyone (to an extent) hello and goodbye. I’m referring to a cheek kiss, which can seem odd, especially if you don’t know the person. When I am in the United States, I will greet my family and friends with a hug if I haven’t seen them in a while. If I am walking to class, or frequently interact with them, I usually smile, say hello, and exchange a few words. When I meet a new person, the extent of physical contact is a hand shake. That is not the case in Argentina. My host sister threw a party for her boyfriend’s birthday a couple months ago. Every single person I met went in for the kiss. This happened only three weeks after I arrived, so predictably, I was a little taken aback. When I decided to go to bed, I kissed every person goodbye.

Argentines love their meat, so unsurprisingly, the Asado (barbeque) is a very popular tradition. My host family has a large, outdoor, stone stove, which I was informed immediately upon arriving was for Asados. The meat options usually consist of steak, pork, and sausage and are meant to serve 10 or more people. I am not a frequent meat eater, but Argentina does have good meat.

Drinking mate is a cultural phenomenon. It is impossible to not see someone in possession of this popular tea. It has a similar flavor to green tea and is consumed with or without sugar. I like it both ways. What I find most interesting is how people drink mate. One person brings the hot water, tea leaves, and mug (with a metal straw). He/she then fills the mug with the tea leaves and pours in the water. That person will then drink the mate until there is no more water. Once it is finished, he/she will fill the mug with more water and pass the mug to the next person (the same mug and straw). This continues until every person present has drank the mate and there is no more water. My first thought after witnessing this was “that’s unhygienic.” I was even more taken aback when this cultural norm occurred during class, and the professor was included. After my initial misgivings, I now engage in the same activity.

After two and a half months, culture shock is appropriately named, but as I have discovered, every culture is wonderfully unique.

Zoe Kaldor is an International Studies and Strategic Communication double major. She is studying abroad with IFSA-Butler in Mendoza, Argentina. Originally from New York, DU’s study abroad program was one of the reasons Zoe chose to attend DU. She specifically chose to study abroad in Argentina because she wants to improve her Spanish skills and experience a new culture, for she believes it is so important in an increasingly global society to be able to communicate in languages besides English as well as experience different ways of life. Zoe is an avid traveler and loves to explore new places; she is excited she gets to do both.