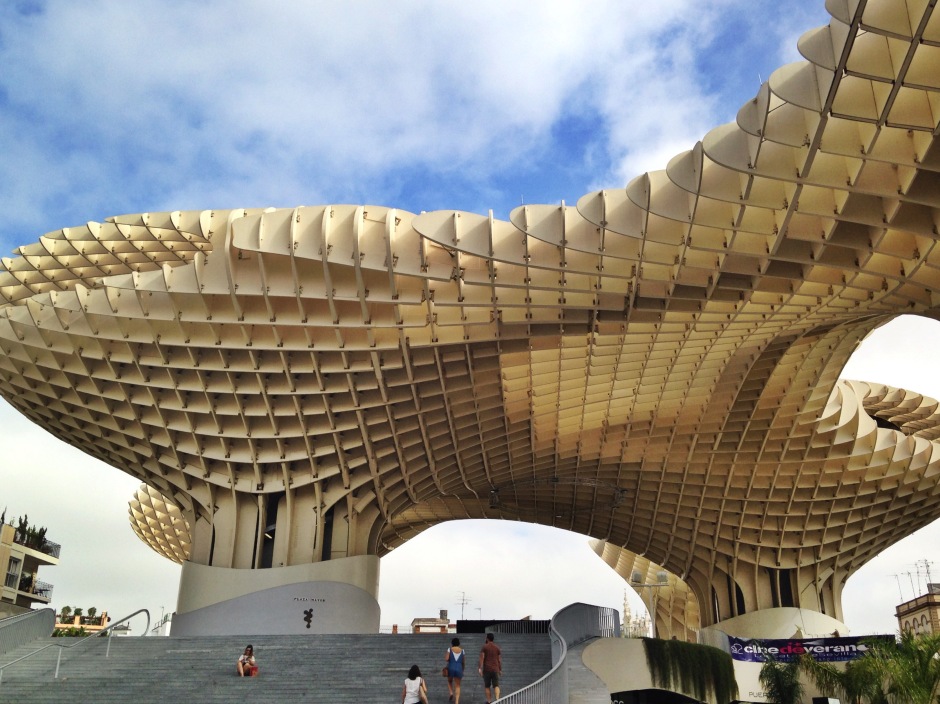 Judging by the first two weeks I’ve spent in Spain, I will feel like I have packed in a whole lifetime’s worth of experiences by the time my three and a half months here are up. Time here feels contradictorily fast and slow – while two weeks has felt more like a month, I’m already lamenting the fact that I didn’t decide to study abroad for a whole year.

The feeling that time has been warped is due in part to how busy I have been. While at home I’m more apt to pass up activities in favor of relaxation, here I have been embracing the “you’re only here once” mentality and have therefore had days that never seem to end (but have taught me that I hit my limit somewhere around 4:00am). When days last that long and almost every moment is full, some experiences are bound to be less enjoyable than others. Sometimes I feel excited by new things. Other times, I just feel alienated. Whenever I start to feel overwhelmed, I try to keep in mind something one of our program directors told us on our first day here: “No one’s culture is good or bad, or better or worse than another – they’re just different.” Reminding myself of this from time to time helps alleviate the unavoidable awkwardness that comes with learning different customs and a different language. Bearing this in mind, I have tried to categorize some of my experiences thus far into three categories. First, I’ll list ones that have been truly good. Second, the truly bad. And third, the “different” – experiences which are both good and bad in turns and which I will eventually come to embrace as simply new realities that shape my life here.

This is only a brief look at what my life in Spain has been like, and so far I can say that the good points definitely outweigh the bad. The cultural differences are starting to feel like they are just that – different, new, exciting, though at times overwhelming. Every day I am so glad to be here, to be absorbing a new culture, and to be learning how to adjust to the many nuances it holds.

I’ve been anticipating the customary semester abroad that the majority of University of Denver students take during fall of their junior year since before I even started college. Still, the fact that I would be living in Seville, Spain starting this September didn’t quite feel real even as I was picking programs and attending pre-departure sessions at our International House. The fact that my next semester will start with a plane ride to a different continent instead of a sweaty day of moving boxes into a new dorm never fails to make me feel like I’m at the top of a roller coaster before it drops: a little scared, a lot excited, and incapable to focus on anything but the certain but unknowable change waiting for me in my immediate future. As summer starts to disappear and I imagine myself abroad, I’ve realized that if I made a Venn diagram of the ‘scary’ and the ‘exciting’ parts of my upcoming semester, I would only be able to fill in that weird, sort-of oval shape in the middle. The only experiences that will be rewarding will also require me to step outside of my comfort zone. No one thing can be exclusively categorized as a ‘fear’ or a ‘hope’ or a ‘goal’ for my time in Spain because, really, they’re all connected to one another. Life, inconveniently, can’t always be separated out into neat lists, but I’ll try to detail the basic parts of study abroad that make me nervous-excited-anticipatory, and will end up making it all worthwhile.

Once I get to Seville, I plan on taking advantage of the several side-trips included in my program, which I have heard are essential. These trips I am not worried about – rather, I’m quite looking forward to them. They come with guides and itineraries. The ones I am worried about are the ones I’m planning to take on my own. I am not travel-literate. The first time I traversed an airport on my own was mere months ago, and, even following the signs, I got lost once or twice. When you struggle to navigate a building, trying to figure out how to get around a new town full of foreign signs is sure to be an experience with a difficult learning curve.

Learning more navigational skills, beyond “the mountains are west,” (which, beyond Denver, is useless) is a definite goal for my time abroad. Up to this point, the only reason I arrive anywhere on time is Siri. The Maps app is my guide, faithfully held up to the steering wheel as I squint towards exit signs and try not to turn at the wrong one (rerouting is stressful). In an age where those who are directionally challenged are saved from natural selection by their iPhones, how will I survive without one in a completely alien land? I guess I should learn how to read a real map? Buy a guidebook? Right now I know I’ll have to at least plan my trips in advance – spontaneous travel may lead to spontaneous breakdowns (or kidnapping. I’ve seen Taken). While learning how to get around by myself makes me anxious, I look forward to becoming more independent and confident in my navigational skills. When I don’t have a guide (or Siri) to hold my hand, I will have to rely on my own capabilities to travel. Once I successfully explore one place, the next is sure to be easier. Besides, if I do struggle with getting around new places, something good is sure to come of it. Aren’t the people who get lost in foreign countries in movies the ones that always find the best pastry shops, anyway? Not that I want to plan on getting lost, but with my track record, I’m bound to eat plenty of delicious crepes by the time December’s over.

While I’m hoping I’ll actually be able to carry on a coherent, awkward-pause-less conversation in Spanish by the time I return from Seville, I’m also dreading the actual process of attaining that comfort with a second language. Inevitably, before I reach that covetable level of semi-fluency, I will put my foot in my mouth and accidentally tell someone I want to eat their child or something. Not that I haven’t already embarrassed myself locally in my quest for bilingualism. Back in middle school, I may have made the mistake of ordering “polla” instead of “pollo” from a native Spanish-speaking waitress at a local Mexican restaurant. Once I got home and SpanishDict’d what I had actually asked for, my memories of the wait staff chuckling at me from behind the bar became seared into my memory with the clarity of belated embarrassment.

Despite its abject cringe-worthiness, that moment didn’t keep me from pursuing Spanish. As of last quarter I was able to make my way through two novels in Spanish and correctly translate some of the conversations between Mexican cartel members on Breaking Bad without reading the subtitles. Both of these accomplishments, though different in size, provided equal amounts of thrill – I can now make convincing death threats and talk about Emilia Pardo Bazán’s work in Spanish with similar dexterity. The promise of future achievements such as these makes the promise of future missteps worth it. I’m preparing for conversational awkwardness to become a daily reality come September, and my grammatical accidents will become useful lessons and hilarious memories (in a few years, surely – maybe by my forties).

One of the main reasons I chose Universidad Pablo de Olavide as my school when I applied for different programs was because of the classes they offered. Though the many other facets of study abroad may be initially distracting, my studies are the real reason I’m going to Spain. Which can really put on the pressure, considering I’m walking into an entirely new educational system. My GPA is precious to me as though it’s an extension of my reputation – I will go to great lengths to protect it (I have seriously wondered why they don’t have dedicated nap rooms in the library. I would probably live there if I could). Knowing beforehand that European universities are run differently than they are in the US has already caused me moments of worry, but I am comforted by the fact that my program has dedicated on-site advisors for abroad students. Still, I’m planning on a little stress and confusion before I understand my new routine. And my new university’s library? Well, let’s just say we’re sure to be seeing a lot of each other, if my syllabus’ reading lists are anything to go by.

Underneath the worry I have for my grades is an excitement to begin my classes. When I read the descriptions online for what I would be learning, I already know I will enjoy all the classes I plan to sign up for. The university provides options for both of my majors, though I’ll be focusing on Spanish because of the interesting variety of classes available that I just wouldn’t be able to take at DU. There’s something kind of nerdy but undeniable about the thrill I get looking through class schedules and book lists. Knowing that I’ll be learning about the culture and history of a country in theory while being able to experience the reality of it at the same time is certainly one of the biggest appeals of study abroad.

Even after trying to categorize them, my emotions regarding study abroad are still fairly inextricable: exited-scared-elated, all in one, and about every part of it, all at once. The weeks are ticking down. It’s going to be a once-in-a-lifetime chance, and it’ll be scary, but it’ll also be amazing. I can’t wait.