I now have just one week until I leave for study abroad! In just one week I’ll be living right next to the ocean (not so different from home, but it’s a different ocean) and I’ll be 9,000 miles from Denver on the beautiful island of Zanzibar, off the coast of Tanzania, Africa.  I’ve watched some of my friends leave already, and this is just making me more excited! And with the juniors leaving, it’s left me with the start of the abroad blogs! My favorite procrastination technique during the fall is starting, and I still can’t believe that it’s starting now!

Really the only thing I’m not looking forward to is the flight there. I love to travel, to see new places, meet new people, and try new things, but I detest the actual traveling part of traveling. Sitting down for a long period of time is like my own personal torture, and combining that with airports, sitting next to people I don’t know, and feeling gross from not showering makes traveling the actual worst. My longest flight is from Washington DC to Addis Ababa, Ethiopia, a trip of about 13 hours. And that doesn’t count the flight from Boston to DC, Ethiopia to Zanzibar, and layovers. I leave at 6am on August 21st and get in to Zanzibar at 3pm on August 22nd, local time. But I know it will all be worth it when I land and see that crystal clear ocean!

With that, since I get asked so often both “Why Zanzibar?”, and “Where’s Zanzibar?”, I thought I’d break down some simple demographics of the island. This is one of the struggles of studying abroad in Africa – nobody seems to know where exactly you’re going (and to be honest, I had never heard of Zanzibar until I applied for the program there).

Probably the biggest reason I continually am asked questions about Zanzibar is that no one from the University of Denver has ever studied abroad there. Being the first DU student to go on my program is so amazing, and I’m excited to have the opportunity to pave the way for other students to study there in the future. But why Zanzibar in particular? I’ve done the Europe thing, I’ve done the Australia thing, and I’ve done the Central America thing. Each trip was life-changing (and I mean that literally, I came back a different person than when I left) and breathtaking and I learned so much, but I wanted to travel someplace completely off the map, someplace I knew I would probably never have a chance to visit again. And the places I’ve visited have not been very different than what I’ve grown up knowing. Since my first tour at DU, I knew I wanted to study abroad in Africa. I wanted to live somewhere with a completely different culture than my own, and also somewhere I could study marine biology, which has been a passion of mine since I was a little girl. When the official packing list for my program stated that I was required to have my own mask, snorkel, and fins because I would be in the water every single day, I knew I found the place for me!

First question: Where is Zanzibar?

Second Question: Is it even a country?

Not quite – In 1964, the island of Zanzibar joined with the nation of Tanganyika to form what we now know as Tanzania. So no, it’s not its own country, but Zanzibar does have its own flag, much like the US states have their own flags! Below is the flag, and then my copy of it I painted onto my sorority letters (of course!). The Zanzibar flag, while it is for the island, incorporates the flag of Tanzania in the upper left-hand corner to show their merge with Tanzania. 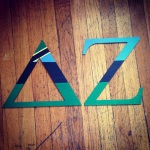 Third Question: How big is it?

Zanzibar is only 1,023 square miles. That number means nothing to me, so I looked it up in comparison to what I do know – US states! To put it in perspective, Rhode Island, the smallest US state, is 1,212 square miles. So in conclusion, the island is TINY. Which is going to be awesome, because that should mean a constant sea breeze, right?

Fourth Question: (I’ve actually been asked this) Is that where they speak the clicky language?

While I am traveling to a third-world country, it doesn’t mean that there is no development. Although the population of Zanzibar is more than 99% Muslim, the three main languages are Kiswahili, English, and Arabic. What’s Kiswahili? It’s the same as what we call Swahili, but the word Swahili encompasses the entire culture, not just the language. However, the indigenous music is this awesome combination of African and Arabic influences, and I’m excited to listen to it live – but for now I have to settle for YouTube:

Fifth Question: Do you have to wear one of those things that covers your head?

There is a large amount of Arabic influence on the island, and is reflective in the people and the architecture around Zanzibar. Native women can choose to cover themselves fully if they wish, but it is not required of visitors. However, visitors are strongly recommended to be more covered than what Americans are used to. This basically eliminates my entire summer wardrobe: sundresses, shorts, and tank tops. But it has given me a great opportunity to buy some new clothes! So I subsequently went out and bought a few maxi skirts, loose-fitting shirts, and the coolest pair of pants I have ever owned and probably ever will own. See below. 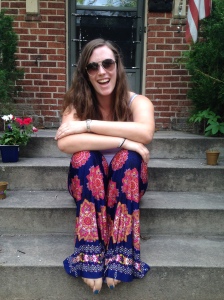 Sixth Question: Anything interesting ever happen there?

In my perusing of the internet for fun facts about Zanzibar, I came across this little tidbit: Freddie Mercury was born in Zanzibar. Um, yeah, THE Freddie Mercury. Having been a Queen fan for as long as I’ve been a music fan, I’m extremely excited to study in the birthplace of such an amazing person and someone who was part of a generation of music that I sincerely wish I was alive to see.

Seventh Question: Is it safe for Americans to be there?

Now this is the question I’ve gotten from every parent I’ve talked to about studying abroad in Zanzibar. I always reassure them that my university would not send me to somewhere that wasn’t safe. The worst thing I have to worry about is pick-pocketing. One of my biggest fears, though, is offending the culture of the natives. A big point my program made was that the two biggest complaints they get about their American students is that they dress inappropriately and drink too much. The absolute last thing I want to do is offend someone, and have that be the lasting impression of all Americans. And being a white person, I will be a minority (something I have never experienced), and I don’t need to draw negative attention to myself. I have traveled twice as a student ambassador with People to People International with the goal of changing viewpoints of Americans. I hope I succeeded then, and I hope to succeed during my four months in Africa.

I had such a fun time compiling all this info and I learned so much, so I hope you did to!