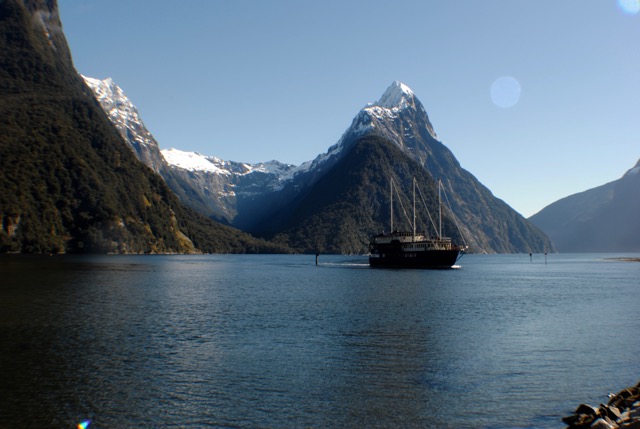 Our spring break trip began at 6:00am on Sunday morning. We packed all 8 of our backpacking backpacks into the back of our van and drove 3.5 hours to Que 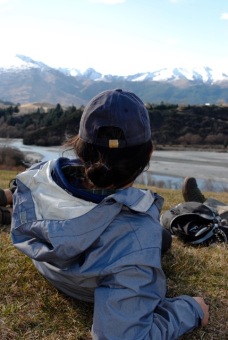 Once in Queenstown we explored the town, found our hostel, and enjoyed the evening at a local ice bar ( a bar where everything is made of ice and you have to wear special gloves and jackets) and a couple other fun dancing bars as well! That day me and the three others who decided not to bungee jump went and explored a ‘beach’ area in Queenstown, the ones who did bungee jump jumped off the highest bungee in the world!

The next morning we left around 7:00 am from Queenstown and embarked on the four hour drive to Milford Sound. Milford sound is in the Fiordland National Park and is a place where the ocean comes into a valley that was glacially carved. The mountains in this valley are beautiful and snowcapped at the top, and covered in rainforest and waterfalls as big as three times the height of Niagara falls  at the bottom!

Four of us decided to do the Milford Sound boat cruise, which was absolutely amazing. The boat looked like an old wooden pirate ship and took us around the sound and under the waterfalls! After the boat cruise we met up with the three people who decided not to do the boat cruise at ‘The Chasm’ which is a rock formation where a waterfall goes in and out of rocks (there are parts where you can’t see the waterfall because there is a bridge of rock covering it).

While in the Chasm we all decided to do some ‘off-roading’ from the tourist approved track and ended up in this little valley where the waterfall ended. The water was crystal clear and you could drink from it, there were rainforest vines and trees

hanging everywhere and in the distance was a snow-capped mountain. At the end of the day, we headed out of the Chasm to see the sunset at mirror lake, which is a lake that as you probably guessed, gives a perfect mirror image of the landscape. We then ended our day by driving to Te Anau and staying in a hostel before embarking on our three day backpacking trip through the Routeburn Track.

At 8:00am the next morning we set off for the Routeburn track, our van packed full with eight backpacking packs and eight people. The car was very heavily weighed down so it was a fun drive! We had to drive 3.5 hours to get there and we had a run-in with some sheep in the middle of the road. The sheep blocked our car for 15 minutes while being herded by two sheep dogs! We then finally made it to the base of the track and ate our bag of the PB&J’s we had made th 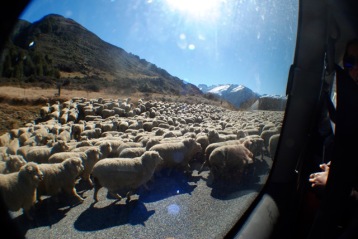 e night before at the hostel before setting out on our journey.

The first hour or two was hiking through jungle with a river to the left of us, at one point we stopped and refilled our water bottles in the river! There was one section of the hike that was only filled with giant ferns that looked straight out of Jurassic Park. After two hours of hiking we made it to the first hut and had a pit stop before continuing on to the second hut. The hike to the second hut was absolutely brutal, it was a steep grade the whole hour up, and I was at the back wheezing due to recently being sick. However, when we got to the the second hut we looked over the whole entire valley where the first hut was located and had a 48 person hut all to ourselves. We finished the night with wine and tin-foil meals of vegetables.

The next morning we woke up and explored the second hut which was surrounded by over seven waterfalls and glacier springs. We then hiked back down to the first hut and stayed the night there. We were completely alone this whole trip until around 8:30pm when a man showed up in the pitch dark in the middle of rainstorm to sleep in the hut with us. (The weather was absolutely perfect the whole trip e

xcept for rain on this day). The man had been climbing a glacier and had to leave due to gale force winds and decided to tramp the Routeburn to have a hut to stay in.

The next morning we woke up with the intention of hiking the Emerald track, however, on our car ride to get there we had to cross multiple streams in the middle of the road, and we could only make it through one because of the weight of the car, and we did not want to risk not being able to return if it happened to rain that night, so we decided to stay a a nearby hostel and explore this little lake town. The owners of the hostel were very nice and had two children and two puppies! They allowed us to walk the puppies around the lake and surrounding area (one golden and one sheep dog)! We finished the evening with a meal, drinks, and a movie before falling asleep.

Our final day was the next morning when we drove 5.5 hours back to Dunedin to end the spring break trip! Overall, it was an incredible time and it was so amazing to hike my first backpacking trip and see Milford Sound.

Jill is blogging from Dunedin, New Zealand this fall semester. 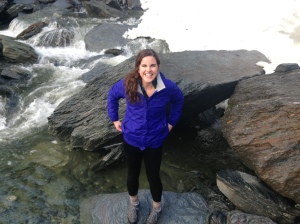 Southern hemisphere programs like Jill’s at The University of Otago in New Zealand started in July and Jill has been having one adventure after another!

In one of her posts she writes; “Last weekend I went on my first trip to the Southern Alps – New Zealand’s South Island mountain range. True to its name, this region may have been taken straight out of Switzerland– picture the Matterhorn (real life or Disneyland version, for you Californians) – and it’s a very accurate comparison.”